An Interrotron is a clever film making device used to create up-close, face-to-face interviews. The Interrotron makes it simple to create in-your-face, gritty interviews. It’s this eye-catching style that never fails to engage an audience.

This creative device allows filmmakers to streamline their interviews, allowing their talent to relax and make eye contact with them by looking directly into the camera. When the Interrotron was invented, it was designed to prevent inexperienced talent from appearing visibly nervous on camera; eyes squinted and darting all over the place. 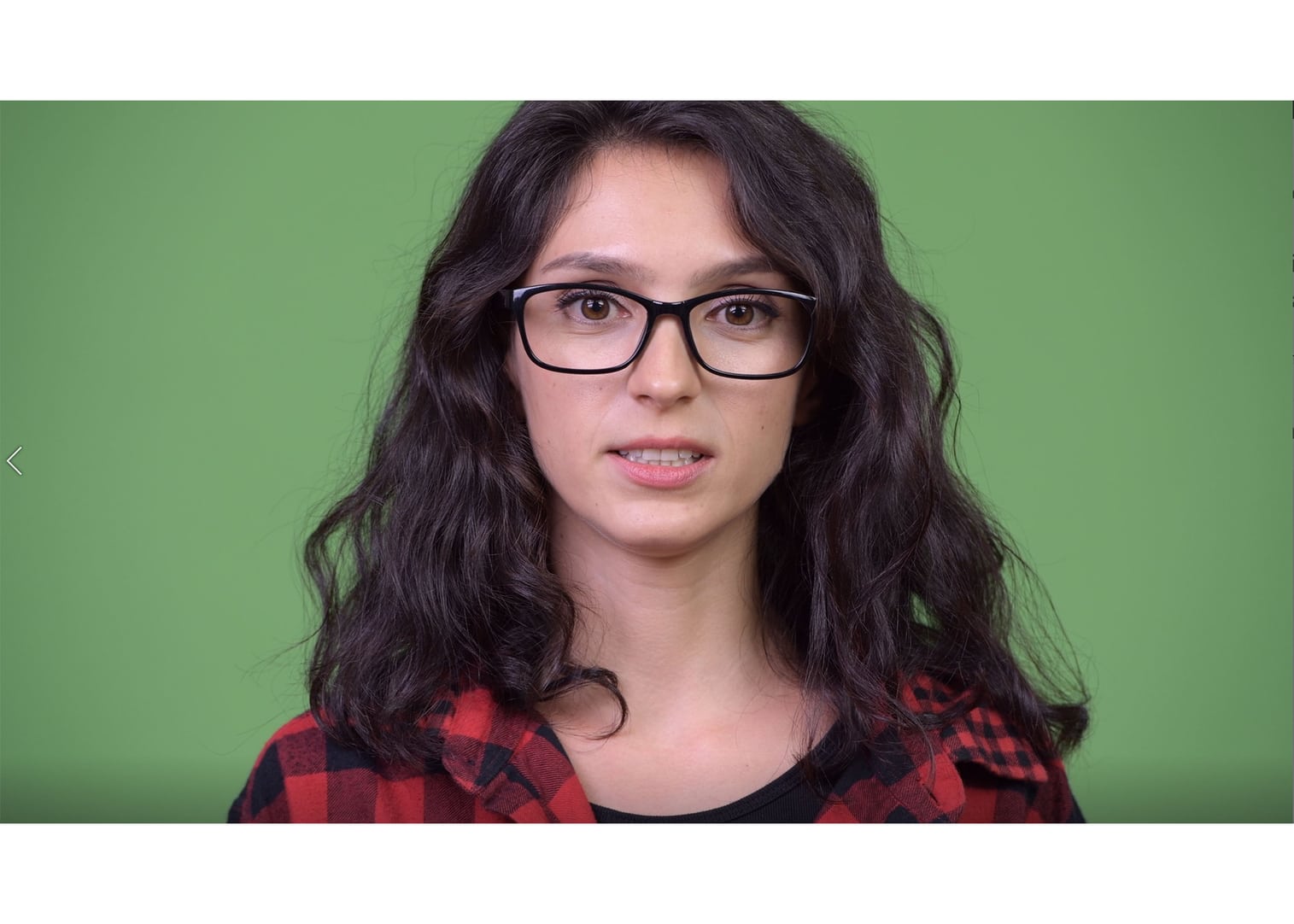 Have you ever watched a documentary and felt as if the person talking was literally looking at you through the screen? You probably even felt as if you could feel their emotions, as if they were directly in front of you.

This is a technique of an experienced filmmaker and an amazing production.

But how do filmmakers create this incredible effect?

This brilliant effect is surprisingly simple to achieve, as long as you know exactly what to use. The best way to achieve this is by using a special type of beam splitter glass, since beam splitters allow any camera to film through them – with precision detail, clarity, and quality. In addition to the beamsplitter glass, a regular mirror is also needed. Alternatively, a small standard size Face 2 Face Teleprompter can be ordered from Amazon. 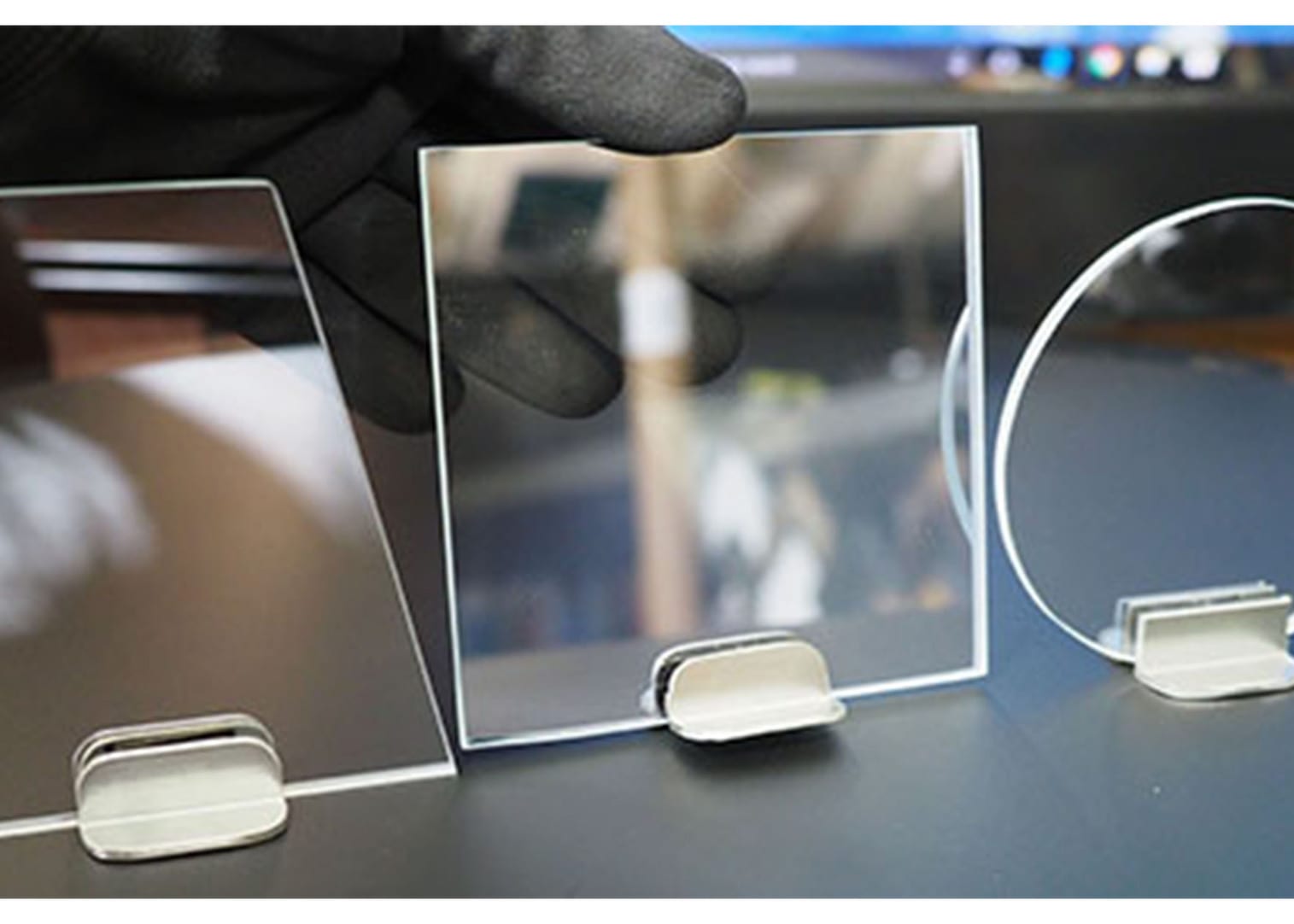 If you’re creating your own Interrotron, I recommend using the 30R/70T beam splitter glass, also known as the Teleprompter Mirror. This will ensure you receive crystal clear footage through the mirror. 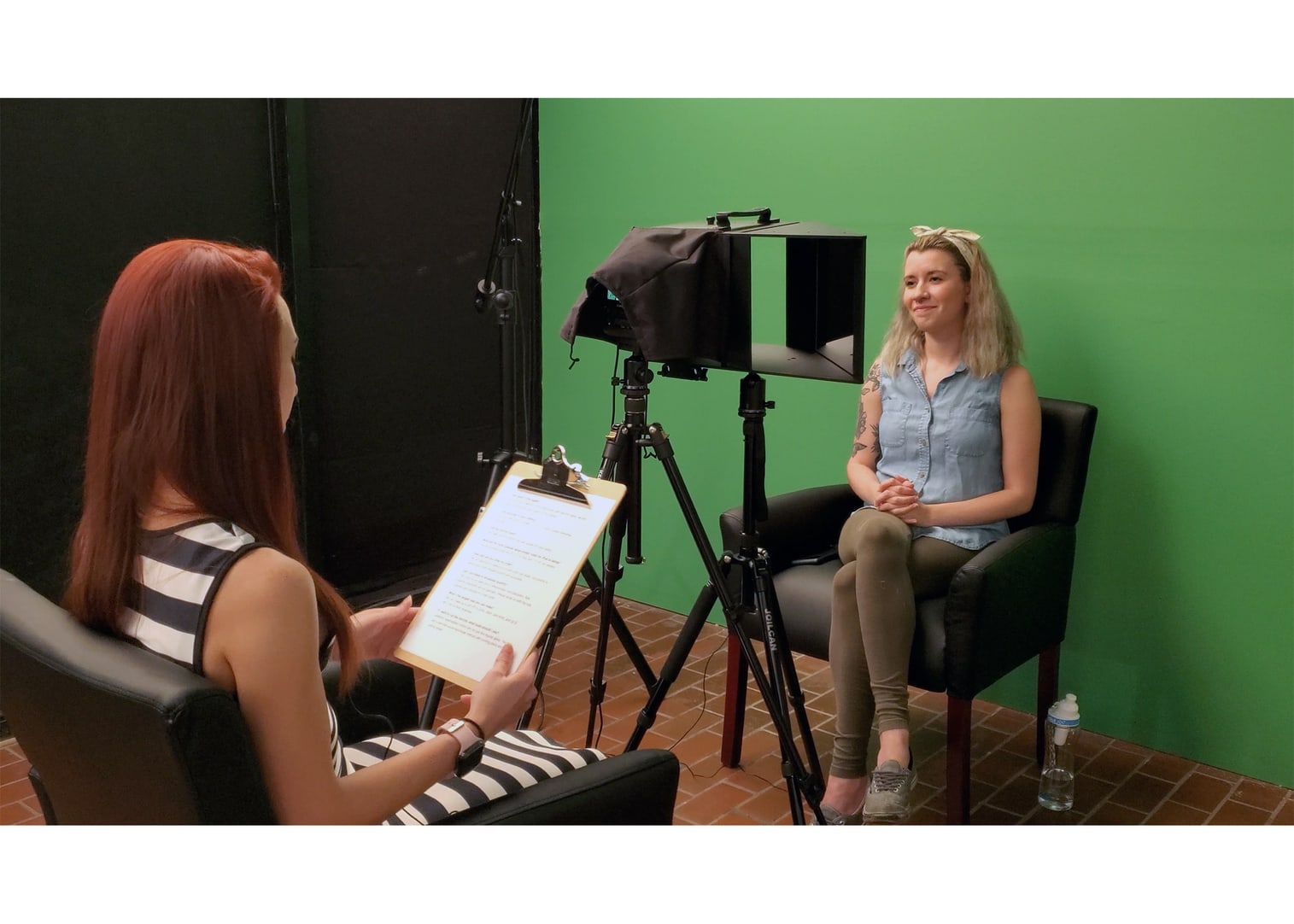 The Interrotron is a phenomenal way to prevent the interviewee from appearing uncomfortable, since the interviewee will see a person that they can talk directly to – eliminating a large amount of the person’s stress and anxiety. With the feeling of an in person conversation, the person being interviewed will be able to relax, and not overthink the situation. This simple technique is what allows the interviewer to create an outstanding and smooth production. 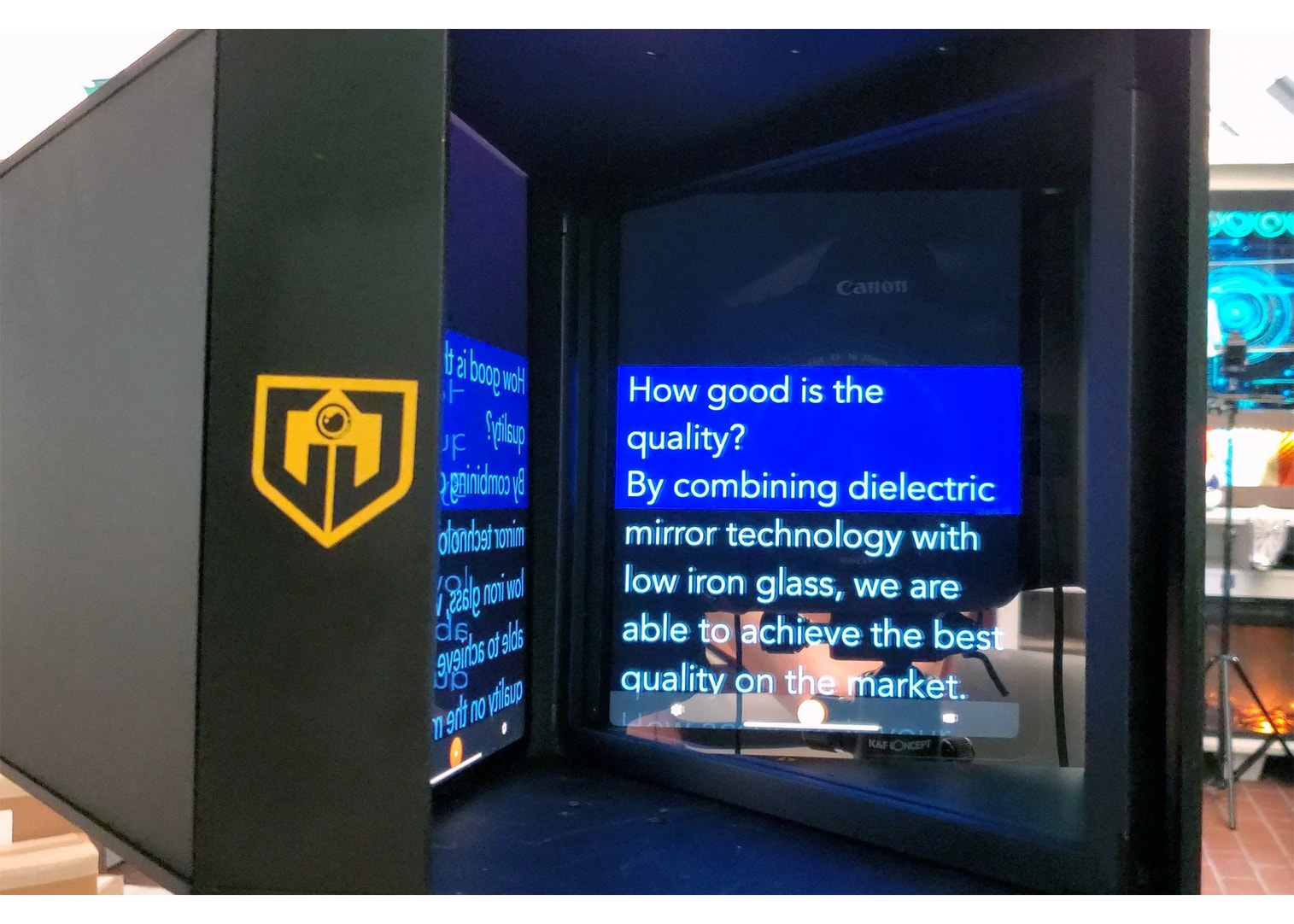 Who Can Benefit From Using An Interrotron?

Anytime you are producing an interview style video whether it is in person, or via teleconference, the Interrotron allows the recording process to feel much more natural; while providing the audience with the illusion of being spoken to directly. The direct eye contact achieved through using this device helps retain the audience’s attention, which is a critical aspect of a great production. 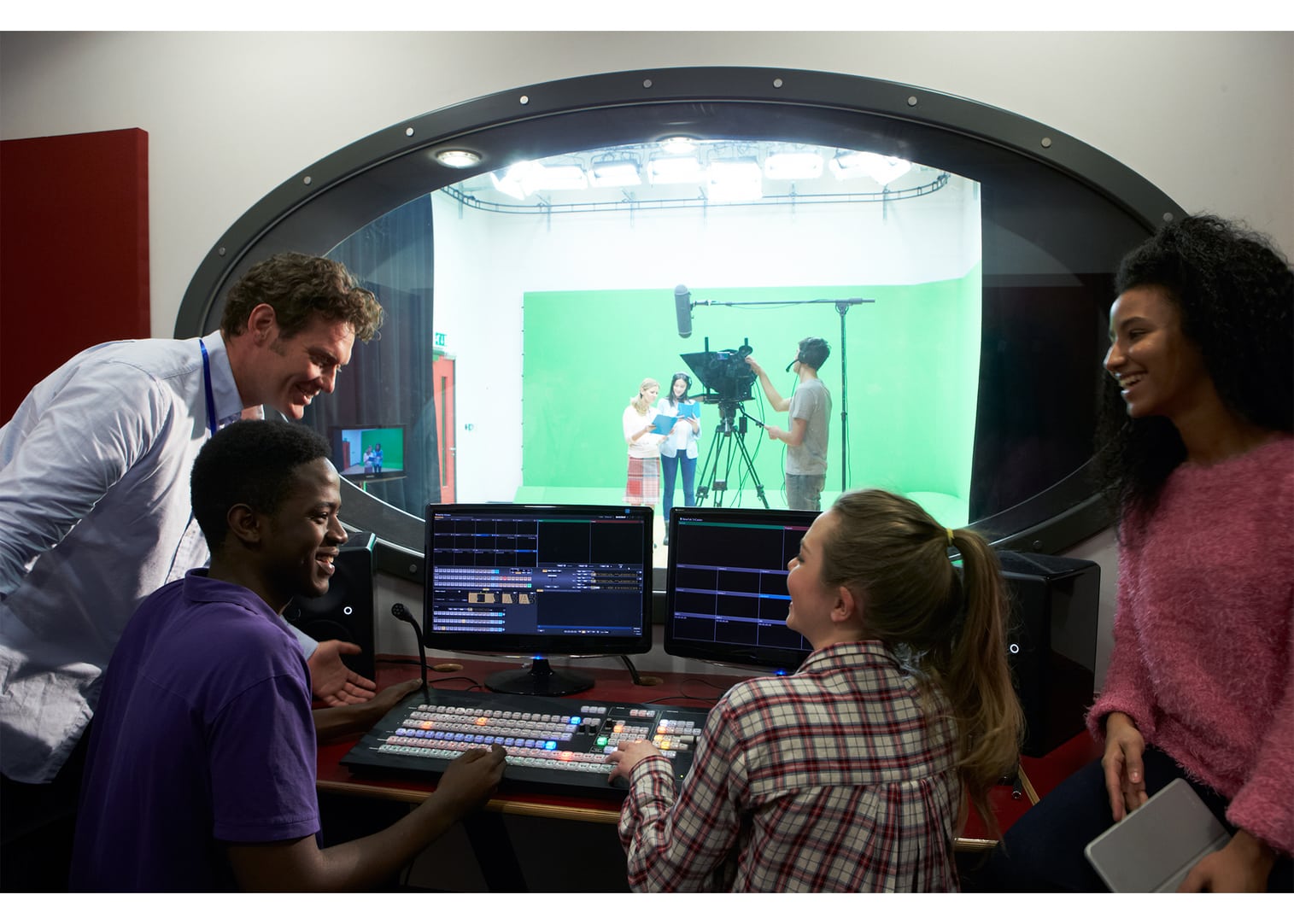 Now, everything we have talked about has seemed pretty great, but will it provide results?

One of the great things about an interview style video is that you can simply ask questions, instead of spending hours on a script and the talent can simply speak from their personal experience.

How To Set An Interrotron Up

Setting up an Interrotron is quite a simple task to perform. To start, simply attach the Interrotron to a tripod in horizontal orientation. 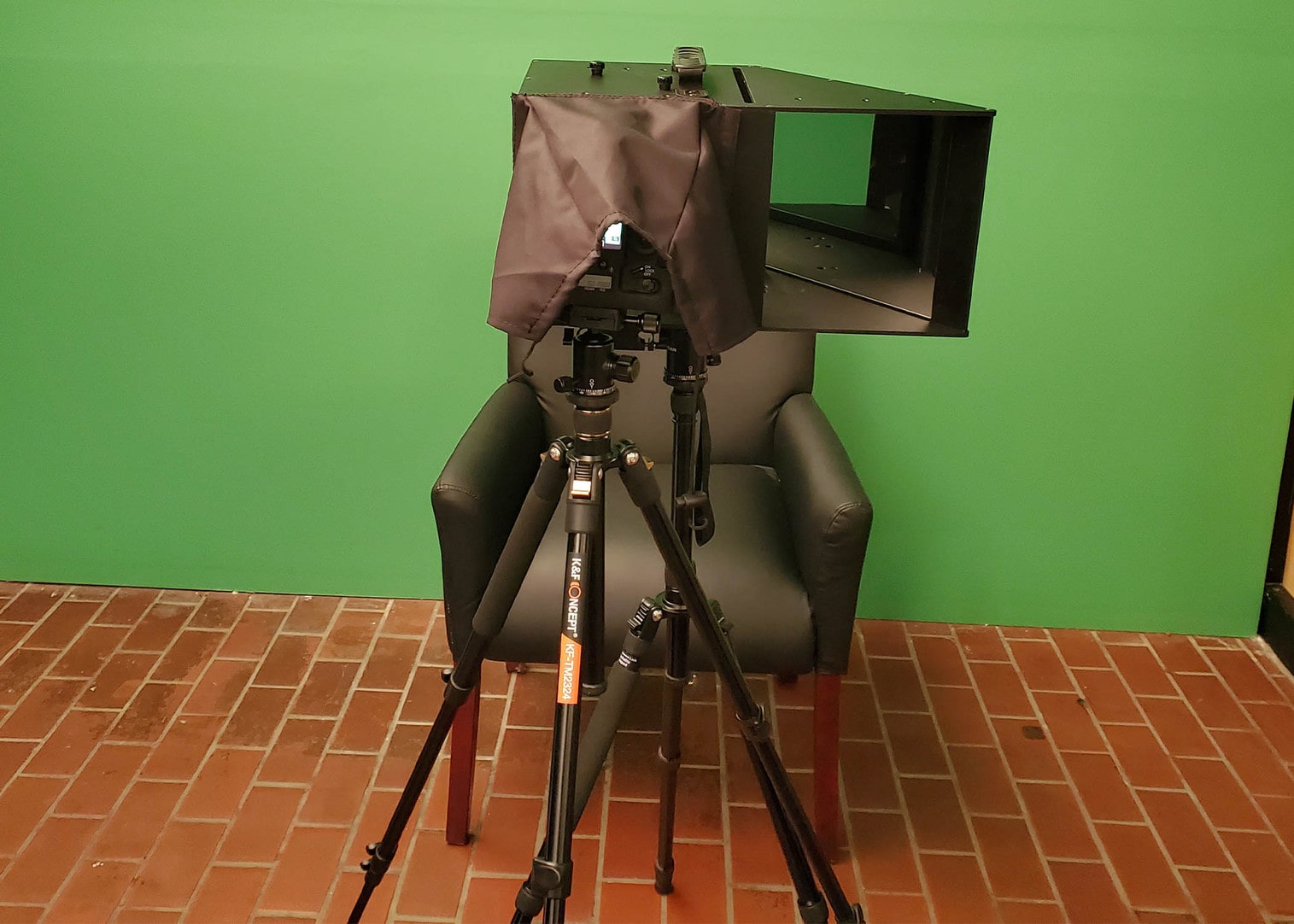 Once the Interrotron is placed onto the tripod, place the camera onto the camera sled, then adjust it accordingly. During this step, you will want to ensure that the camera is at eye level with the interviewee. The camera should be placed as close to the glass as possible – WITHOUT the camera touching the mirror – all while keeping it centered in the glass.

Afterwards, place a shroud or an alternative covering over the camera. This will ensure that light will not pass through the mirror and into the interviewee’s view. Once the shroud or covering is in place, all that is left to do is adjust your camera focus and you’re ready to record!

PRO TIP: For the best end results, both the interviewee and interviewer to be the same height. 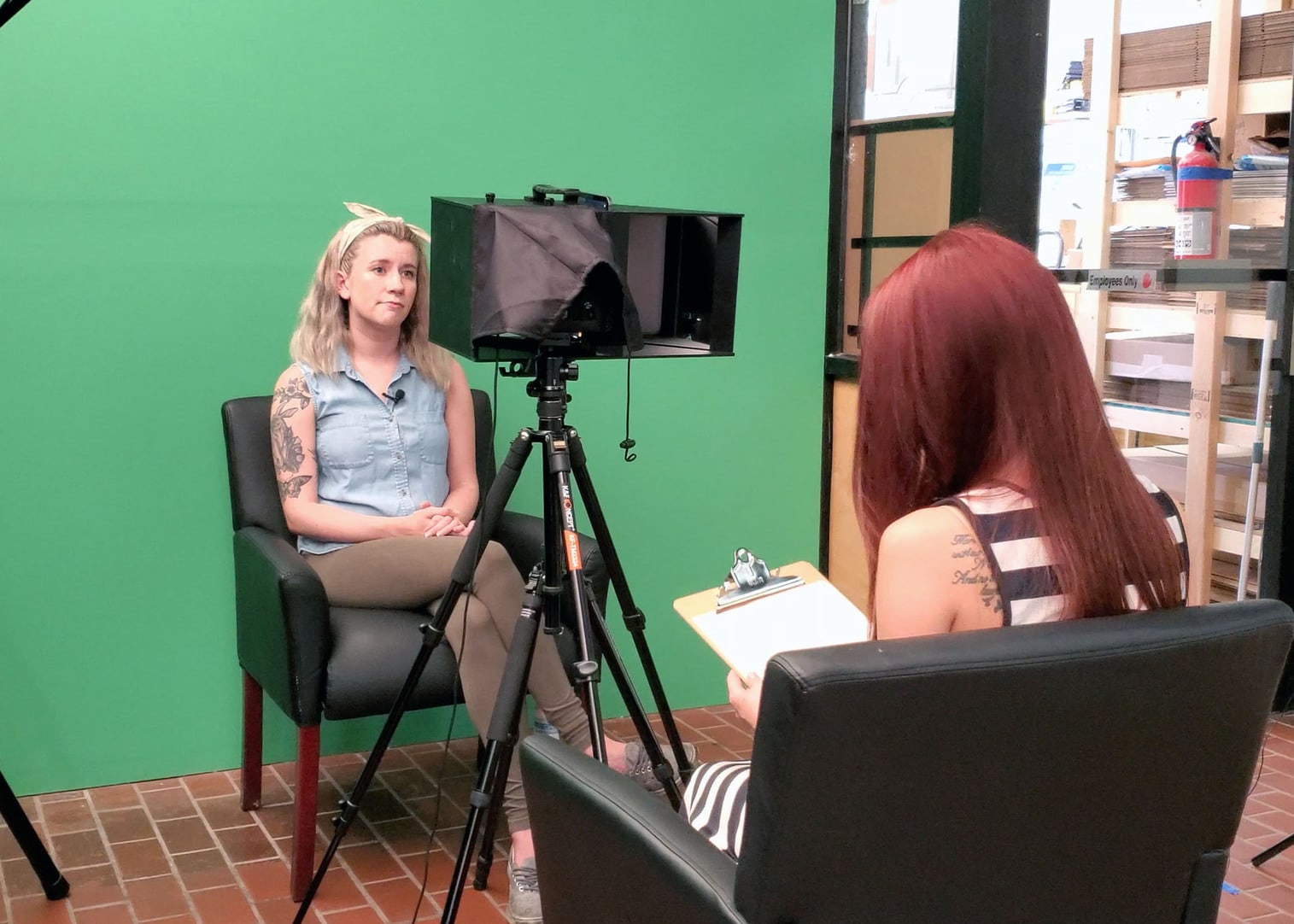 In order to use the Interrotron as a teleprompter, simply slide the tablet or phone in place prior to the interview – making sure the script is centered on the camera lens. Having the script centered with the camera lens will ensure the person is making continuous, as well as direct eye contact with the audience.

Errol Morris, a filmmaker, created the Interrotron device to assist him in creating his masterpiece documentaries. Morris was known for wanting to create an intimate and calming environment during interviews. Errol’s goal was to assist his interviewees on feeling as comfortable and focused as possible during the interview. He found that even if when he did this, those he was interviewing would still become uncomfortable, especially if it was every day, average people. The ordinary people Morris would interview still became visibly distracted by the film crew, which inevitably caused them to lose eye contact. 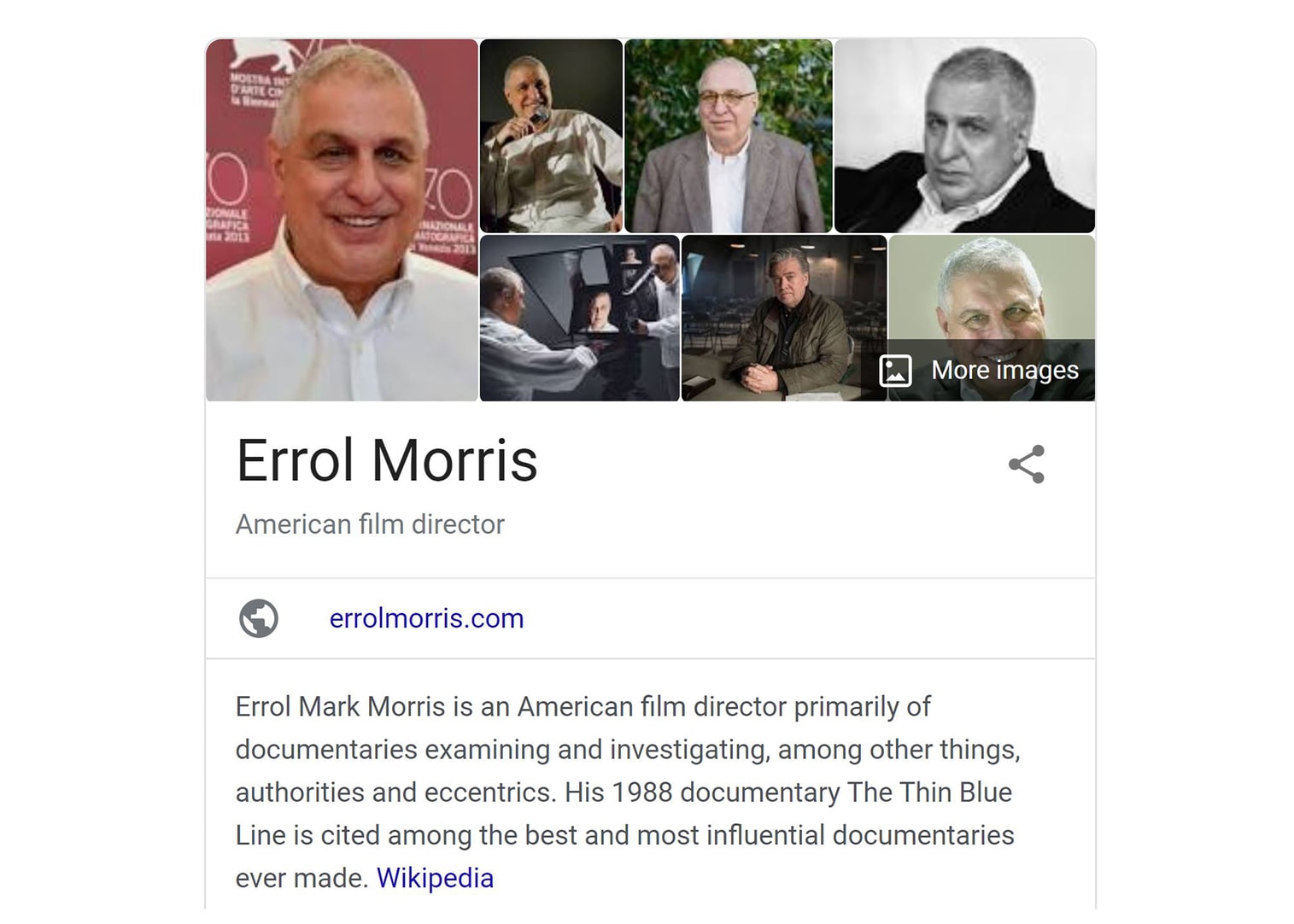 Errol’s intense dedication for producing amazing interviews caused him to feel as if something needed to change and that’s when the Interretron was created. The Interrotron’s name came from the words interview and terror combined, as his device was created to remove the interviewee’s terror during interviews. He never patented this device, so people are free to make their own! Over time, many companies started using this device. The popular TV show 60 minutes is known for using the Interrotron for many of their serious interviews.

Can I Make A DIY Version?

When people find out about the incredible invention of the interrotron, they often reach out to us with the question: Can I make my own Interrotron? The answer is: It is definitely possible, but you will need to have access to filmmaking equipment! 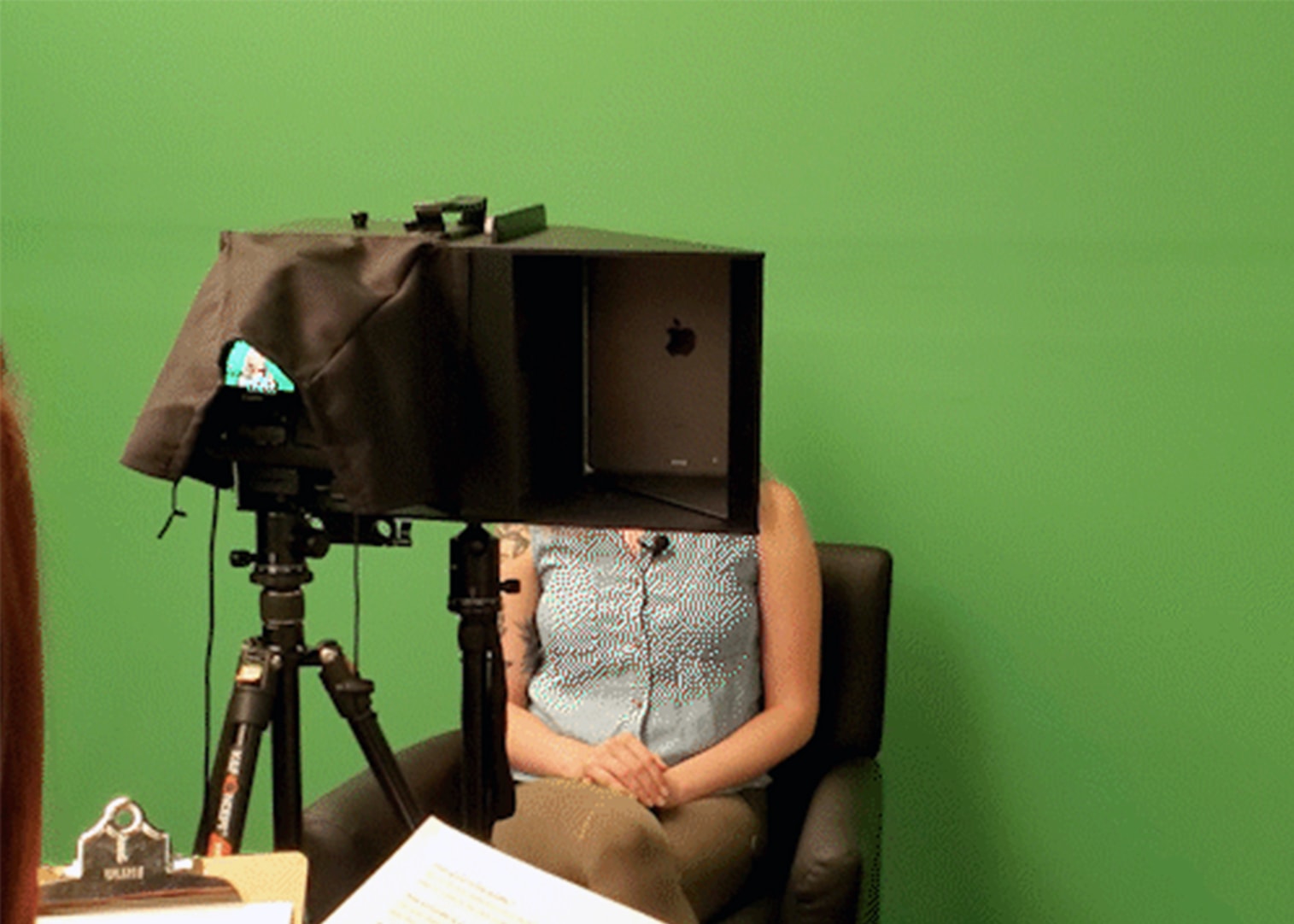 An Interrotron is created by combining a beam splitter mirror with a black cloth or shroud that is clipped on the opposing side of the interviewee using regular, every day binder clips. The critical equipment that is required to make an Interrotron includes: a Teleprompter Mirror, also known as a beam splitter mirror, along with a camera setup, a monitor, and a video feeding device. With the combination of simple these pieces of equipment, making an Interrotron is definitely an achievable project!

Are you missing the beamsplitter glass needed to complete your DIY Interrotron?

If so, we’ve got you covered here!

We supply the best Beam Splitter Mirrors in the business with quick turnaround times, and custom creations. We are extremely dedicated and focused to provide our customers with exactly what they need quickly and efficiently, without diminishing the quality of our products. 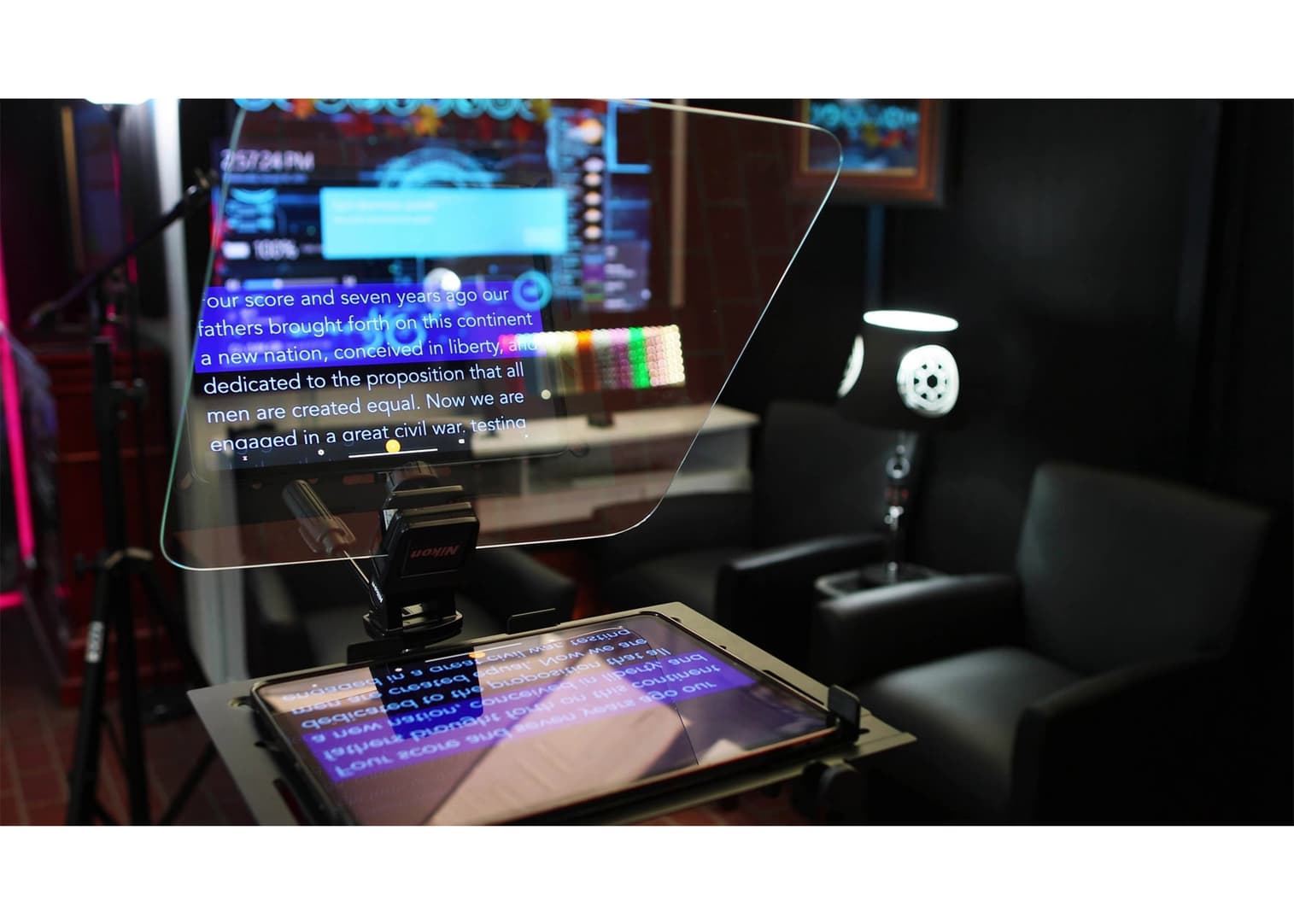 Our mirrors are hand cut, and sanded to ensure that each piece fits the specifications of the customer and that the glass is completely safe to handle. The advantage of using a high quality beamsplitter mirror, as opposed to a two way mirror or film, is that you can record through it with flawless picture clarity. No need to worry about distortion!

If you are on an absolute bare minimum budget, and have some time on your hands to work on the kinks – you can replace the video feeding device and monitor by having two iPads facetime each other. The disadvantage of this is the tablet or other device must be adjusted in order to make sure that the client can see your face close enough, which might take a second to figure out. However, this technique has been proven to work by various filmmakers on YouTube!

And there you have it! An in depth look at the Interrotron. Using this device, you can create a comfortable, candid atmosphere for interviews, making your videos stand out from the competition. With the use of the Interrotron, you can quickly increase the quality of your production, while also showing your level of skill and knowledge when it comes to interviewing people.